From reserve to star player in less than a year (Pic: Lucas Mercon / Fluminense FC)

Brazil have plenty of skillful winger come forwards, but number 9 is a problem. Could Pedro be the answer?

From the country that has given us the likes of Ronaldo, Romario, Pele and many more, Brazil is producing a disproportionately low number of good centre forwards these days.

Gabriel Jesus may be a top class number 9 in time, but he scored no goals in five starts at the World Cup, which ultimately cost Brazil. Roberto Firmino deserved more game time, but other than those two, there isn’t a whole lot of options for Tite to choose from.

Brazil are not short of top class wingers with the likes of Neymar, Douglas Costa and Willian available. And they have plenty more coming through: Malcom, Vinicius Junior, Rodrygo, Richarlison, Paulinho, etc. But what are the other options at number 9?

Willian Jose is a possibility, but he never set the world alight when playing in Brazil. And you wonder why he is still playing at Real Sociedad and hasn’t moved to a bigger club. Diego Costa is, of course, Brazilian, but he opted to play for Spain instead of Brazil.

Diego Tardelli is 33 years old and plays in China. Fred, who started games for Brazil in the 2014 World Cup, is 34 years old, currently has a cruciate ligament injury and was never really that good anyway, even when young and fit. Hulk and Alex Teixeira are possibilities, but they are both better on the wing and play in China, where the level is not that high.

That’s pretty much all of the best, experienced options at the moment. Worryingly for Brazil, there isn’t that much coming through either. 21-year-old Roger Guedes is decent, but Palmeiras deemed him surplus to requirements. And before recently selling him to a Chinese club they shipped him out to Atletico Mineiro on loan (where admittedly he played very well and scored nine league goals).

Gabriel Barbosa might be a shout in the future, although he was voted as one of the worst signings in Italian football last year. He is back at Santos this year, on loan, and is doing okay. He is only 21 so I think the critics have been a little bit harsh, but you wouldn’t bet your house on him being the answer to Brazil’s number 9 problem.

The other possibility is Pedro, who is 21 years old and plays his football for Fluminense. He was on the bench a lot last year, but the departure of Henrique Dourado created an opportunity. Since getting a chance in the starting place, he hasn’t looked back.

He scored seven goals in the Rio State Championship and was selected in the team of the competition. And he has carried on that form into the national league, where he is the joint top scorer with nine goals. He is now considered to be Fluminense’s best player.

He is a little bit gangly, doesn’t have the ease of body movement as the likes of Neymar. Earlier this year I saw some of his interviews and he seemed quite shy and not particularly confident. So at first glance you might have thought that the lad doesn’t have what it takes to be a top-class pro and Brazil’s number 9.

But he his confidence is growing with every game, and every goal. And he is starting to play with some swagger. I watched him play Palmeiras last week and while he didn’t have his best game, he created two chances for teammates out of nothing.

In the first he showed some impressive chest control and a flick to put his teammate through on goal. And for the second, he started a counter attack by putting the ball through an opponent’s legs before picking out a teammate with an inch perfect, curled pass. He many not be that quick, but he is no slouch either. He’s got a good touch and decent skills for someone who is 6’1”. Most importantly, he knows where the back of the net is.

Bordeaux offered 8.5 million euros for him last week, but that was rejected by Fluminense, who insist that something closer to his 50 million euro buyout clause will be needed.

He good form hasn’t only put him in the shop window, it has also put him on the Seleção’s radar. According to Globoesporte, he could be set for a call up later this year and his name was even discussed by Tite and his coaching staff during the World Cup in Russia.

In fact, it turns out that Pedro first caught the attention of Tite and his staff when he was unknown, 19 year old kid, playing in Fluminense’s youth team. Here’s why:

When players report for Seleção duty, they often arrive in dribs and drabs. To make up the numbers in training, the CBF invites youth players from the clubs in Rio to take part in the training sessions. On one of those occasions, one of those players was a young Pedro. According to Globoesporte:

The staff liked him, his movement and ability to protect the ball. What caught their attention most at the time what exactly what is attracting Tite and his assistants now: Pedro is a rareity in Brazilian football, which almost doesn’t produce number 9s anymore.

While there is a host of options of attackers that play on the wing, there are very few centre forwards emerging in the current generation….. Pedro, however, is the young player at the highest level. There are a few other names on the radar, like Raniel, of Cruzeiro, but with a status lower than the league’s current top scorer. 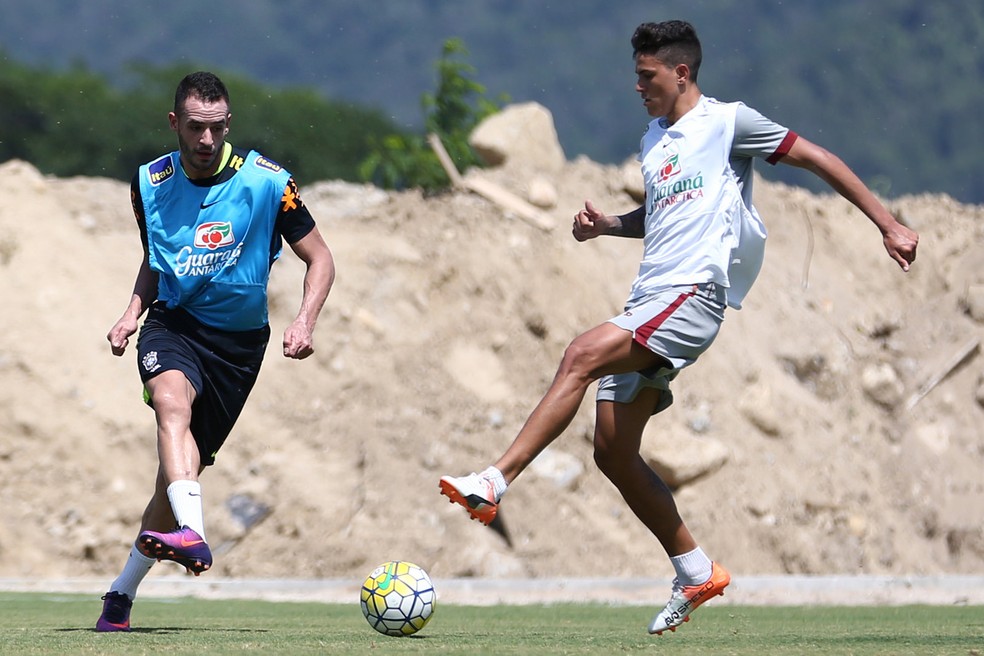 If that is correct, it sounds to me like Pedro will be getting a chance sooner rather than late, as Tite and his staff look to the future and Qatar 2022. There will be three more call ups in 2018 – in September, October and November – expect to see Pedro’s name on one of those lists.

5 thoughts on “Is Pedro set for a Seleção call up?”

This site uses Akismet to reduce spam. Learn how your comment data is processed.